Three Friends and a Boat……

Three Friends and a Boat……

Now this is one week I’ve been looking forward too, the return of two very good friends from school who also this year are reaching the tender age of 21…… again!!!

Phil H and Phil D had both visited here back in 2006 and 7…… things have changed so much since, but our goal for the trip was to catch a 2lb roach…..yes you read correctly roach !!! Now we have kept in contact over the years but this was a great chance to catch up on old times who is doing what and with who!!!! Whilst doing what we have since junior school “go fishing”. Phil H has fished some incredible places around the world and rubs shoulders with some well known and respected anglers…. but it has to be done a certain way!  It’s not always about the end result it’s more to do with the whole package, where it was caught, the circumstances in which it was caught, the tackle , the presentation, the bait, hoping your tactics produce, tinkering to get that extra fish…….. think you get what I’m saying…… so my 6lb test cat rods and 3.5lb test carp rods  were to have a week off!!!!

Phil H knows his stuff and had brought all relevant  tackle to have a good go at the Ebro’s huge and I mean Huge roach population.  First day fishing I took the lads up to Ribaroja, here is vast deep and holds a good amount of roach. More of a scouting than a days fishing but after a while we found some good size roach at some distance and in over 30 feet of water. That night we enjoyed some good food and wine and had a good tactics chat …presentation was the key to get amongst these roach so it ment dusting off my boat and getting it in the water. We were prepared bait wise with large sacks of maize, wheat, and pigeon feed soaked then boiled with good old “Jolly Green” as a hook bait. So Day 2 we hooked up the boat and set off to have our first proper go at the Roach. Wels  camp kindly let me moor the boat all week at theirs , we went off to explore the vastness of this stretch of river . A few hours past we decided that prob keeping it simple was best so we baited up just the other side of the moorings and where we had fished from the bank the previous day. I didn’t fish, I was more keen on getting us settled really but it wasn’t  long before the lads were catching, big sliding floats fished close to the bottom nearly 40 feet!! 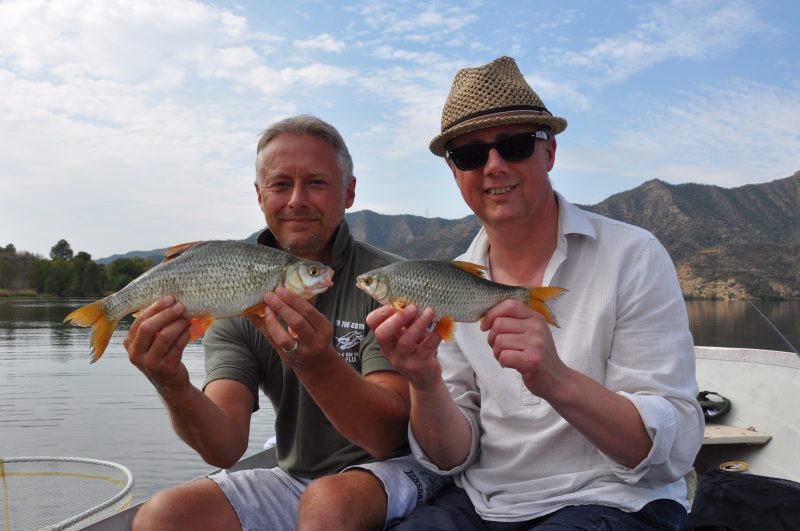 Following day we started to get into a rhythm, baiting up the swim opposite the mooring and fishing the swim close to bank. By being in the boat but fishing exactly where you could from the bank gave us so much better presentation, we were right over the fish easy cast, well just a flick and baiting up all much easier. The lads were soon hauling, I mean hauling, Phil H’s tactics were spot on, they fished the bank swim till the sun started  to go down, then finished off just opposite the mooring into the dark. They caught loads all good pure roach, no hybrids just cracking Roach. After another cracking evening eating fine food and drinking fine wine out of a carten and fridge ( apparently one doesn’t do this in Essex)!!!  and because the lads had done so well I decided that just watching them wasn’t cricket so Phil set me up to have a go as well…… great stuff 3 friends bobbing about in a boat….. weather had been fantastic all week, we had beautiful scenery, cold beers, banter, food and flies!!!!!! what more could we want…..ohh yes a 2lb er would be nice.. We soon got into the shoal and wow there must of been thousands of fish down there, all cracking fish, a few about the pound mark nearly all 10/12 oz but it was Phil D who struck into what’s was obviously a better fish . With my excitement or poor gilly  skills I nearly knocked it off whilst lunging with the net but no harm done we were soon looking at a very big Roach. The lovely old scales Phil had brought with him showed the fish weighed 2lb 5oz well done PD and target achieved… 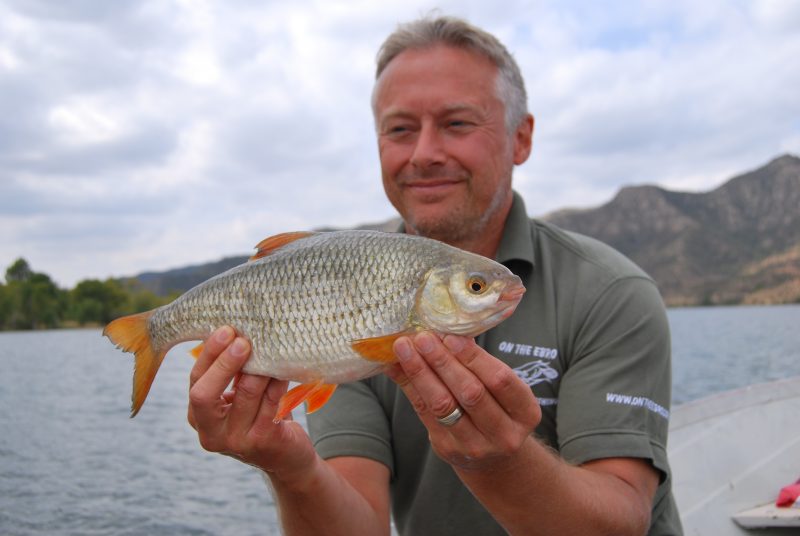 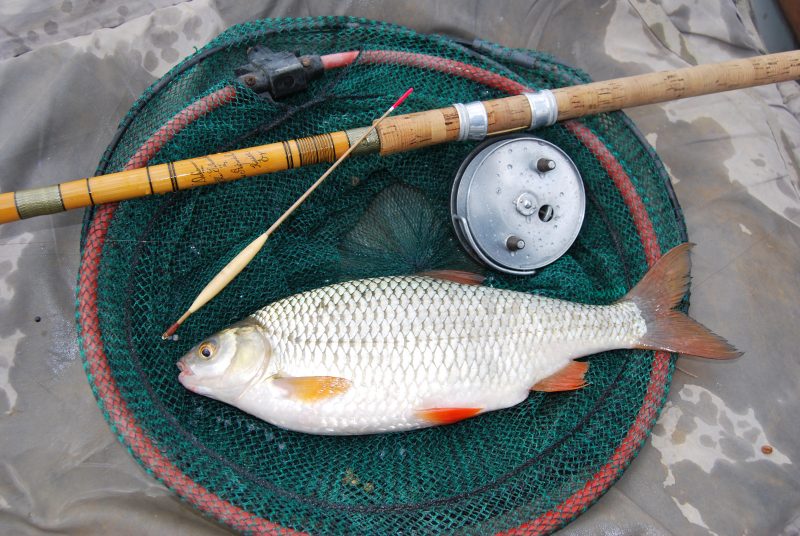 We went on for the next two days having such a great time, Phil H had a 2 hour spell where he banked so many crackers including 1 just short of the 2lb mark and even myself landing one at 1lb 14oz . 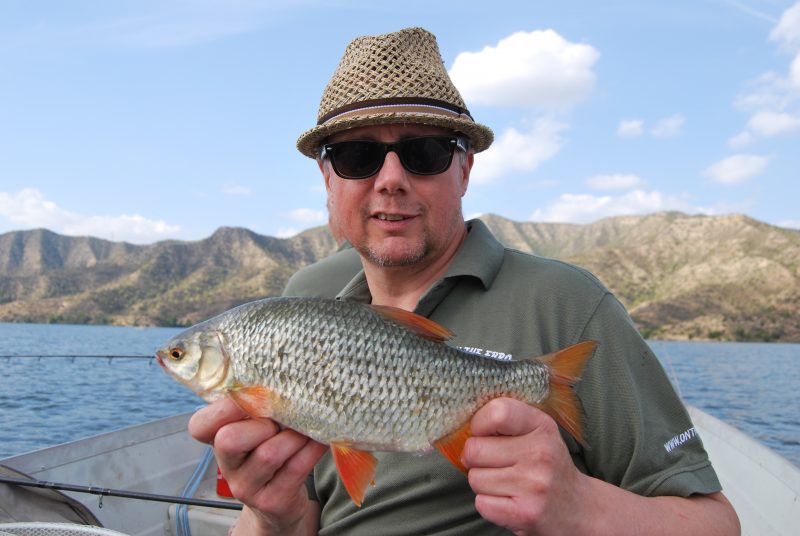 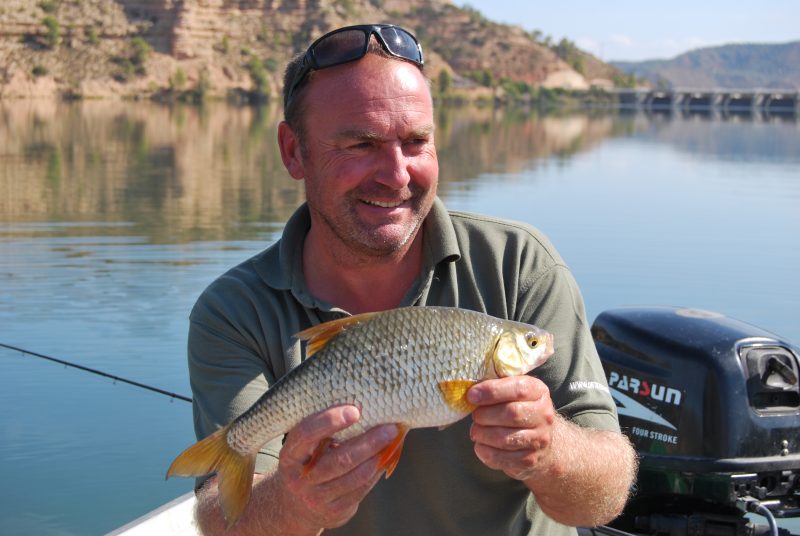 What an incredible week, not just the fishing, the company, the evenings out, everything went so well but went so quickly….. we caught hundreds of roach and a 2lb er as well a week to remember for sure …..made special as from the tender age of 12 until the tender age of 50 we still haven’t lost that fishing bug……. who would have thought back then the 3 of us would be bobbing around in a boat, in the middle of the Fabulous River Ebro.. 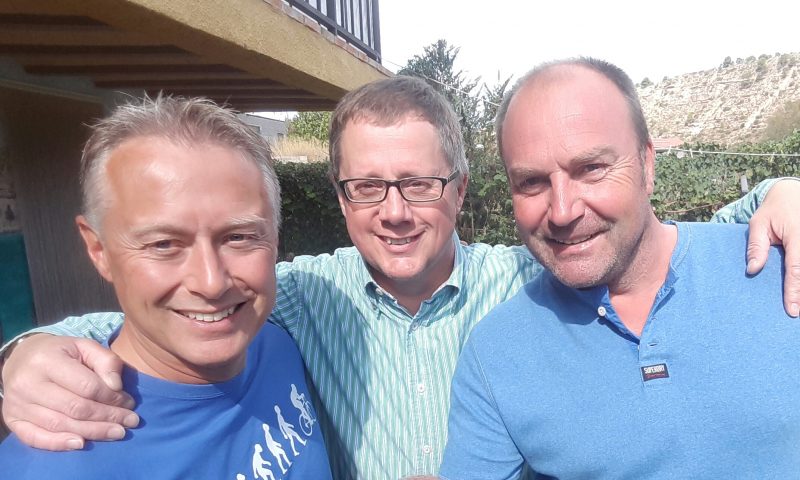 Thanks guys a truly great week….