Very nice to welcome Stuart and Carole, Stuart’s belated birthday present. Pleasure anglers by trade but after hearing about and seeing the pictures the Ebro was on Stuart’s bucket list.

Leading up to their trip the weather had looked very nice. Previous rainy period turning to nice warm Spring sunshine, but all was about to change! The North Pole decided to have a holiday bringing very cold weather to Spain for 4 of the next 5 days. Fishing nights was not on the agenda so we had to fish well to try and get a bite during the day. Mornings were very frosty but although the bitterly cold wind made it feel cold once out of it it was sort of quite pleasant. Day one we had an afternoon at the factory, really just about showing them the ropes and getting some bait in. Day two we had 4 cat rods out and 2 carp rods, bright blue skies, cold wind, no fish!! Day three and time for a rethink, Figgy was on my mind and it needed some bait going in so fish until 4pm then a couple of hours down at the garden to try and get them off the mark!! blanking is not what we are about!! Figgy didn’t produce, but we did see a decent fish roll over the baited area. Time for a go at the garden, pre-baited with boilies and maize, surely we’d get off the mark. Traps set and 15mins gone Stuart was in, a nervous scrap but ending in a very happy and relieved Stuart and a new PB.

With a good few fish showing confidence was high and just as the light was fading Carole was in, pleasingly for Carole the fish came in quickly and with a little help from Stu they were soon holding it up for a pic, also a new PB. 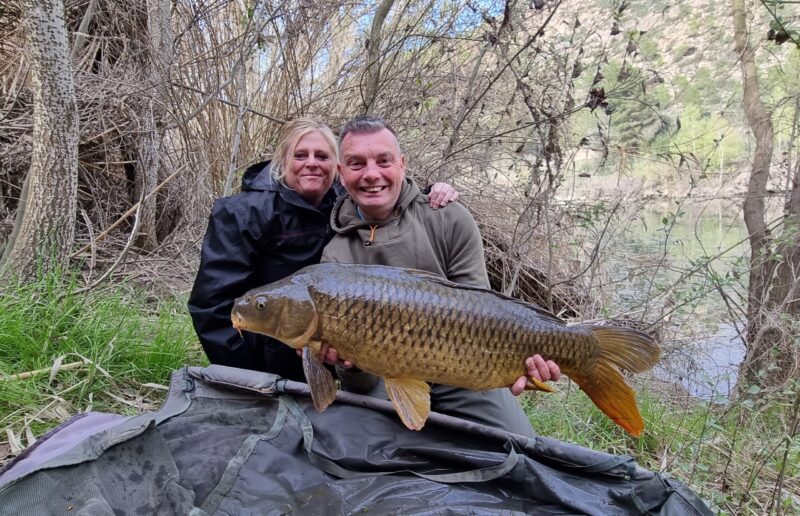 Last days fishing and the plan was Figgy followed by another couple of hours at the garden. Weather was much better with no frost and didn’t take us long to get 4 rods out, target a 30lb Catfish. Here is where their trip turned into one to remember! They had such conservative goals, they knew the weather wasn’t on their side but we had a nice carp each in the bag but it would be nice to go home with a Cat. Leading up to me having to leave them unattended for an hour (to feed them and get something for dinner) I informed Stu of what to do and showed them previous videos of cat captures. Reel churning rod bending action, not to rub their noses in what they were missing but to show them what it was like the experience a big cat and hopefully give them a heads up if something should happen when I was gone!!!!! 20 mins or so I was gone for, bread bought just needed paying for, text message…… “help fish thanks” quickly followed by a phone call, Carole on the line , please come quickly Stu has run out of line!!!! I paid for the bread and got to the river as quickly as poss, to find Stuart sat on the floor, rod in the air hanging on for dear life!!!! I really wish Carole had videoed the fight, it would of made good viewing, we were using the Spod rods with the 12000d reels which only hold about 200 yards of line. Stuart was in a state of shock I think lol, not sure anything can really prepare you for a good old scrap with a big Ebro Moggie! I undone the bail arm wrapped some line around the spool a few times and then brought the fish in for 20/30 yards before handing Stu the rod back. Only 170 odd yards to go……. so funny as he pumped in a still very lively moggie. With his back in bits biceps burning it wasn’t long before we saw what had caused all the fuss, a good fish not the 30lber he had wished for. Slider and sling wetted down it was time to pull the fish up the bank for weighing, now they got to see just how big it was . Seeing the big moggies in the photos is one thing but for the first time in the flesh is quite another, they were truly amazed when the scales read 105lb that really was job done!!!!!

Much to Caroles liking no more action on the cat rods! I think she had seen enough lol but we did pop down the garden for a couple of hours where right at the end Carole had a great fight with a quite angry carp. Very well played and another PB as the scales read 24lb 11oz. 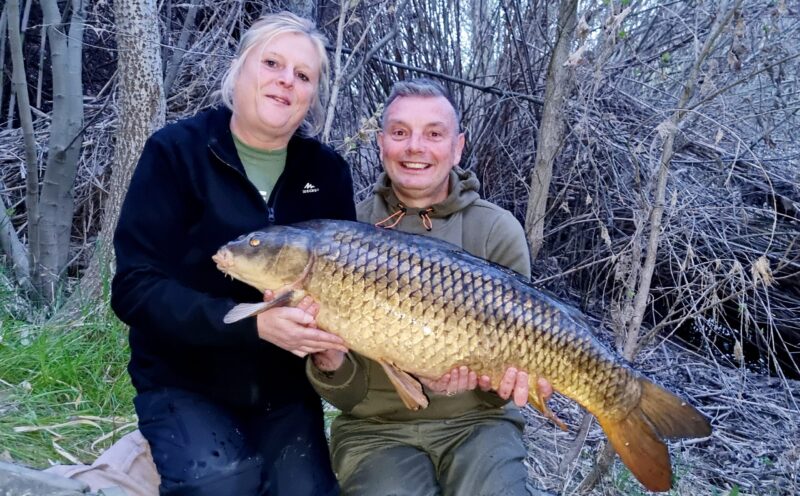 That was that, only 4 fish caught but every one a PB and more than they had expected, Stu had all night to try and peel his lucky socks from off his feet as the morning was home time. One of those very rewarding trips not just for Stuart and Carole, me also. Thanks for making me more stories to be told and hopefully look forward to future trips here On The Ebro.