Time for Russ and Mike’s return after missing out last year. We always have a laugh when they’re over so I was looking forward to seeing them again. Peace and quite has to be top of the list for them so  garden it was . Didn’t take long for Russ to land a small carp quickly followed by Mike. Day 2 garden again and a couple of carp and small cats graced the bank followed by a sea food feast that night, so all going well. This was their 9th trip here, and never previously wanting to fish Mequinenza we felt it was time to give it a go. The swim I’d caught some good carp from earlier this year ticked their peace and quite box so it was there we headed. Luckily the swim was vacant so great stuff and we were soon all set up for a 2 night stay. Carp rods out to start but we had a plan to get some cat rods out should we want. Weather wise wasn’t great as it was so windy and it is  quite open with huge waves crashing straight at us but that evening one of my margin rods was away, after steering  it clear of a couple of snags it was Russ you took over to land a very big carp. Now Russ you could say is a big lad but he makes big lads look small just ask my bed chair!!!!!!! So you just have to take my word for it this was a big 41lb 2oz stunning common. 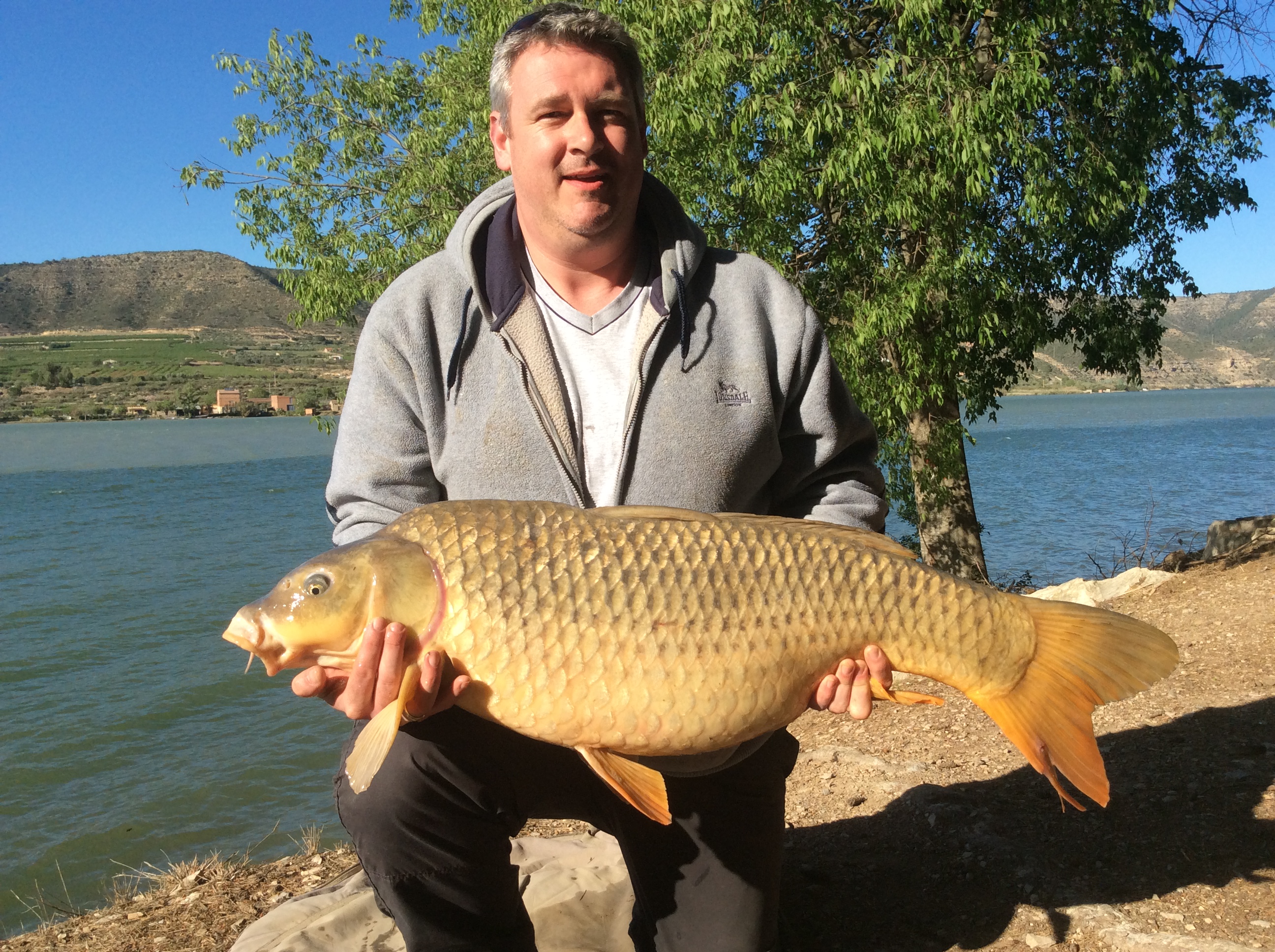 Great start then and another big carp from this swim. Nothing much happened until we brought the rods in as no night fishing allowed here apart from one of the funniest nights ever, probably due to the good quality wine or should I say the good quantity of wine but you had to be there!!!! Hence the D team is now official ……( take too long to explain!!!).

Next morning …..tad of a sore head but one of my rods was away again, I lifted into …..well nothing as my main line cut off straight away but it was a bit of action. Mid morning and with us all catching a bit of sun down one end of the swim one of the alarms was on melt down…….it was one of Russ’s rods which was down the other end!!! Well Russ is a big lad but cricky he can move !!! but after playing the fish for only a short time it found a snag and dumped the hook!!!!  The day was so much better than yesterday and by evening a good few fish were showing, trouble being was getting them to feed …..we gave it our best but even put out 2 cat rods we couldn’t add to the 40 on the first day, 2 more lost fish to my rods due to a snag littered with old line. This was just a short trip so we packed up early which gave them a couple of hours back at the garden where they managed to finish their trip with a small cat. It will have to go down as one of the funniest ever, and with a nice carp to show for their efforts, Russ is back later in the year so look forward to that and we should get amongst the fish then.