After a week off back in the UK I was looking forward to seeing if the river or more being its inhabitants had woken up. It’s been a tough start especially with the cats not feeding so maybe they were going to play ball this week. Nice to have Ryan returning and also James who hadn’t even be on a plane before so hopefully they would have a good week. We started off with a late evening through  into the night at the garden, as usual they had plenty of action James had a nice cat at 40lb with Ryan concentrating on the carp banking loads but all doubles. Day 2 we spent at the Fig Tree……1 small cat so no change here !   So the lads done another evening down the garden where Ryan landed many more small carp and James done battle with cracking moggie at 82lb….the biggest we’ve seen for a while. 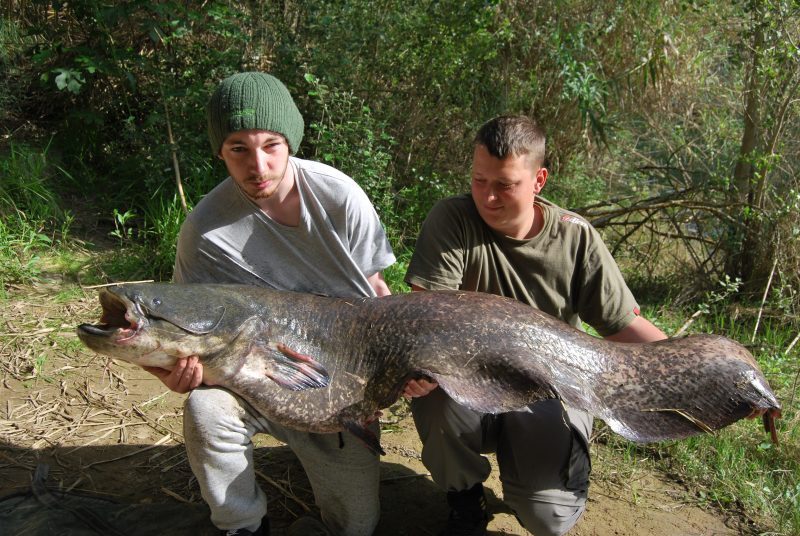 Well a good start but the following morning the carp had started spawning, even at the factory stretch the carp were in a frenzy over in the reeds so the decision was made to track on up to Mequinenza…….much to Ryan’s delight. Our target was going to be carp only and we were in luck as my fav swim was empty so in we went and soon had camp set. First few hours passed without a bite but early evening Ryan was in and was soon holding a cracking common at 30lb exactly. 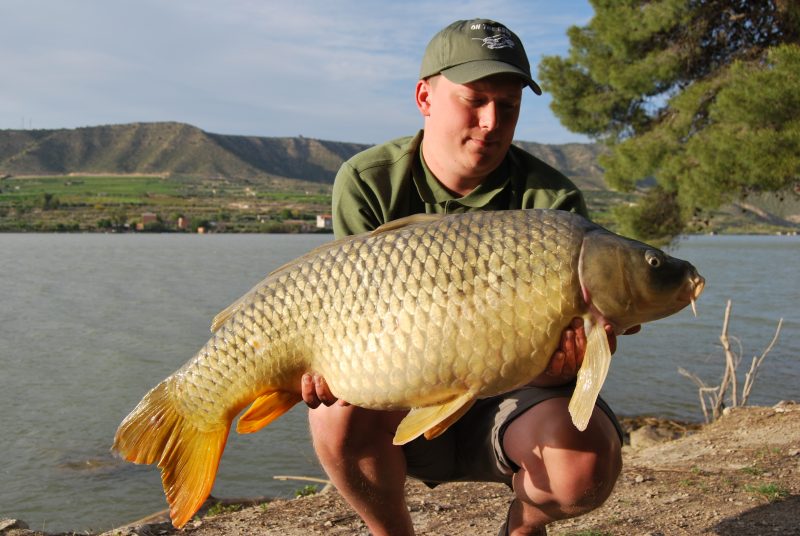 Nothing else happened before midnight so it was rods in and sleep till 6am. Next day we got the rods out on our spots, Ryan loving it with rig making and general carp fishing “Stuff” meanwhile James had flopped!!!! Being away in the heat and lack of sleep taking its toll so he slept for the best part of 48 hours!!!!! He didn’t miss much as both me and Ryan lost fish after fish, nice to be getting the runs but hook pulls and being cut off was a tad hard to take even James who had surfaced from his bedchair, as I did a food run lost a fish number 6 on my rods!!! Ryan did manage to put us on track with 2 high doubles and then it was my turn to land a few upto 29lb. Next day started well with us landing a few more fish to high 20’s but we had been forecast thunder storms so time to batten down the hatches!!!!! Well what a storm very windy then rain and hail stones but as it was easing off I had a run landing another 29lb common then another and also Ryan landing a couple of 20’s great few hours fishing even if we did get a bit wet!!!! Following day started well with more fish landed and a couple lost but at about 10am I was into a better fish getting close to Ryan netting it for me when James was into a fish too, ouch proper scrap for James Ryan scooped up mine which we left in the landing net has we went over to help James with his.  Ryan struggled to lift this one out and it soon became clear why ……James had landed a 40 ……I  lifted mine out and thought this is close as it also was a lump….so it was at 40lb 8oz fantastic brace of carp. 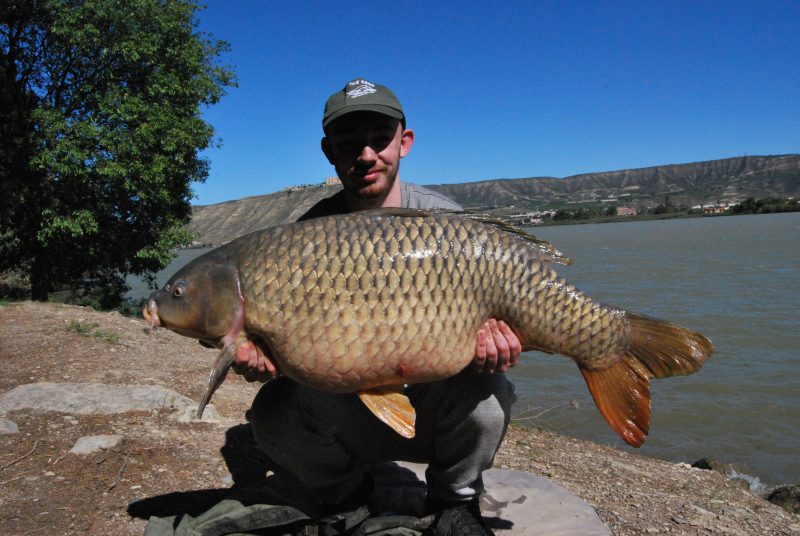 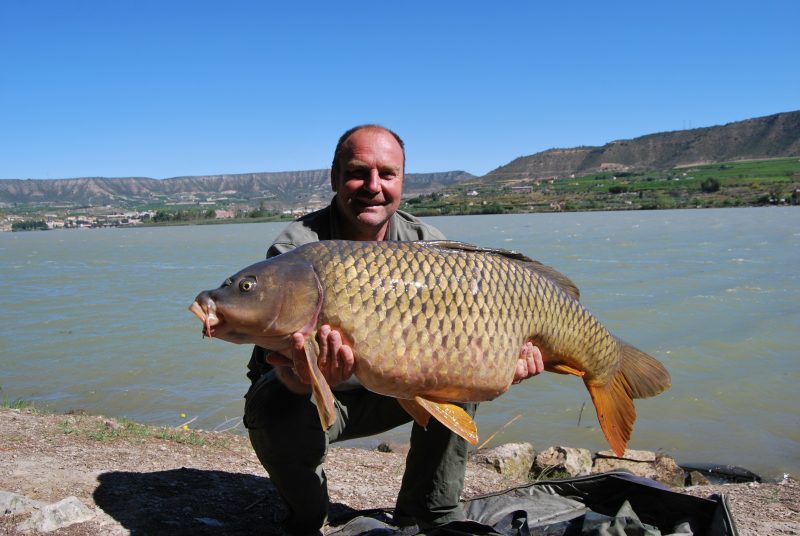 Well what a mornings fishing and the evening didn’t disappoint either with Ryan landing a new PB at 36lb !! 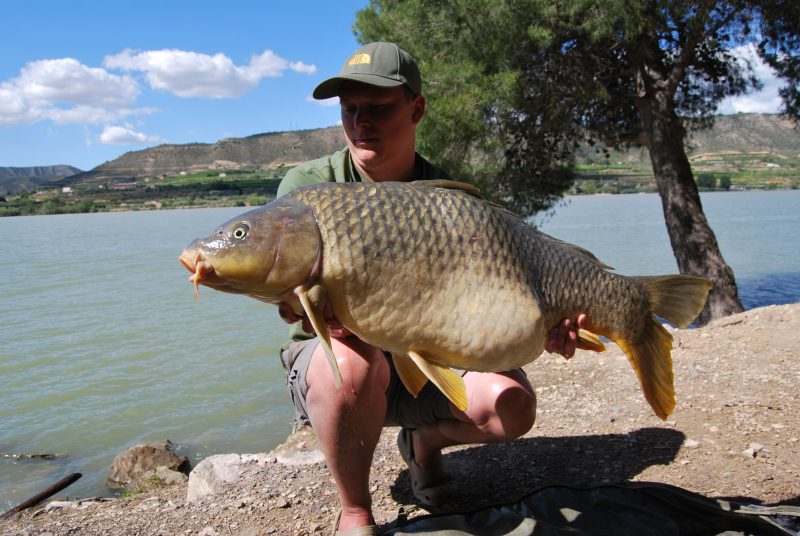 All the fish were coming to my favoured boilies and it didn’t stop there we went on to land 28 carp between us with Ryan finishing on a real high landing yet 2 more 30’s at 30lb 4oz and another new PB at 38lb 12oz. 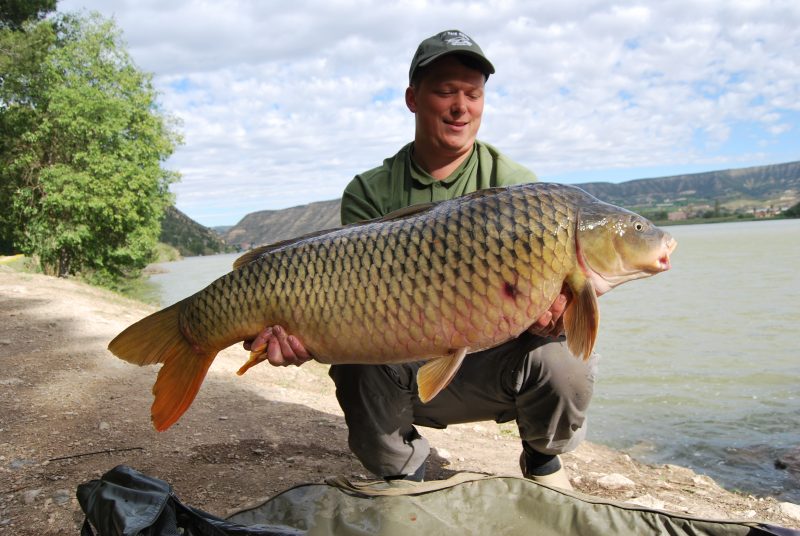 The end of a great week had come, we had fished so hard and got our rewards, James was now a different person even though he only ate bacon sandwiches and biscuits all week, Ryan was buzzing having fished this famous stretch of river landing 12 fish 4 being 30’s and me feeling very pleased that we could get amongst the fish big ones at that!!!  Surely won’t be long before the cats come out of hiding, the carp will be spawning on and off for the next couple of weeks, we saw evidence of the cats spawning also so any time soon……