Last season saw you catch some amazing fish, we had some fantastic trips with all the laughs and banter thrown in to, it was a really great year.

The year for me though ended  in the most tragic way, too cruel for words the most saddest time… my sweet caring Niece, loved by everyone passed away after a short illness at just 22 years old.

Having been in the UK most of the winter I hadn’t done any fishing at all but James was due over, now becoming our pre season blow away the cobwebs, see if we can catch that Ebro monster early trip. We’ve been fishing further upstream each year on these trips, this year we decided on Escatrón where we had done ok the year before. Last year we arrived to find the Ebro almost a stream, with large mud flats where the water usually is. This year however we were greeted to a very full Ebro, same swim chosen totally different tactics, looked so fishy…..

With these trips I am very much fishing myself, I’m sure I gave James options on fishing left or right and I’m sure he chose right!! So I had to my left all the mud flats and grassey margins to fish to where the river had come so far up. By the time we had set up camp evening was upon   us but gave us time to see and hear where the fish were showing. James definitely had fish out in the middle of the river but some 100+ yards to my left just off the grass margins I had a lot of fish. First light I took the dingy mounted with the fish finder over to where the fish were showing 8,9 and 10 feet and some nice clear patches amongst the weed I also had a nice bush to use as a marker.  My tactics were to change , I normally fish double boilie or a snowman but it looked a good time to fish a spinner rig with my ever faithful pineapple pop up over the top of crushed boilie and maize. Using the dingy to drop my bait gave me the perfect presentation, James was captain and he carefully lowered the rig down before putting about 4 handfuls of mix over the top. Mid morning (after a huge drop back which I left) the left hand rod literally got ripped off the alarm.. the fish ploughed through the long grass stems in the margin trying to get into my marker bush…. Captain James to the rescue my line getting caught up in the tough grass meaning I couldn’t move it. James after a couple of attempts had it nestling in the net. What a cracking start a very chunky but perfect common weighing 36lb.

James started with double boilie on one rod and a single halibut pellet on the other . His rods stayed quiet the first day but carp were still showing out in the middle along with some big cats rolling. That evening I managed to land a couple of fish off the margin spot both about 18/19lb and James landed a beautiful fully scaled mirror also from the margin spot.

The following  morning proved to be a busy one, I started off with a beautiful common of 31lb 6oz and another at 26lb, James had a common that went 28lb 14oz then his double boilie rod bent over. He pulled into it but it must of been coming towards him, after reeling like mad he caught up with what we thought was a carp but it soon became apparent this was a cat and an angry one at that. There’s not much you can do when you hook a big cat on a carp rod, the first run took so much line. James started to gain some line back on the reel but we were fishing near a water pumping station and it looked like his line was rubbing against the concrete walls which were under the water. After some 10 minutes the inevitable happened and the line parted, a real shame as it was obviously a big fish. 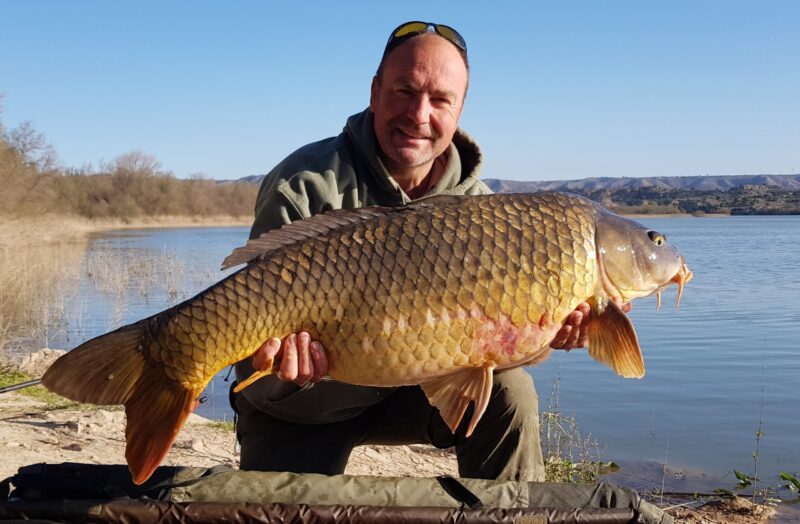 Evening  was upon  us and I was starting to get news that the Spanish Government were possibly  going to start taking measures to stop the spread of the Covid Virus. We brought the rods in for the night and were planning to fish till midday but the morning news wasn’t good, bars and restaurants were to close at midnight and restrictions on movement between counties were to be put in force. Whilst packing away I managed another nice mid thirty common again the margin rod pineapple pop up producing. That was the end of the trip, on the journey back home we noticed the huge queues outside the supermarkets, even the petrol stations were queuing! This was the start, I got James back to the airport where his flight took off after a 2 hour delay but it wasn’t  long before the full extent of the measures the Government were going  to implement. Confinement soon followed initially for 15 days but then another 15 days and another !!! We were literally locked down only allowed out for food or medication. By the end of May we were allowed to start going out, I got the rods out and managed some cats and a nice 30lb common from the Factory swims. June the news was getting more encouraging and the restrictions were loosened……… July the Government announced that they would reopen the borders and planes  were back in the skies, could I at last be able to get my season started ????