We started well up stream in Escatron but it was time to start fishing nearer to home…. Rick and Mick arrived and got off the mark quickly with small cats from the garden. Their trip was to be split in half due to them going to watch football in Barcelona. When they got back I set them up in the Factory swims…… they done well catching some nice carp and both leaving having done battle with a big cat Rick with a 95 and

Next in were father and son Tom and Ryan, used to mainly fly fishing this trip turned out to be a really great experience as they caught some really cracking fish. Tom started with a 70lb cat on a carp rod, Ryan had some smashing carp to 36lb 12oz and had a real scrap with a 97lb cat….. Dad had carp to 30lb and done battle with more cats on the carp rods. 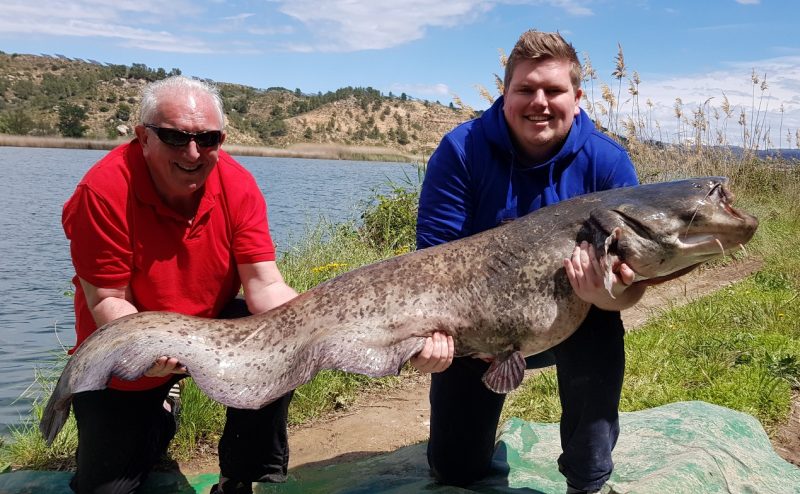 Rob and Mark next and I always look forward to seeing them…. we have such a laugh and we always seem to nick a few fish too….. last year was a bit of a hiccup due to the floods but they quickly starting catching with Mark and Rob landing many cats to 88lb. They also landed plenty of carp with Mark landing a cracker at 37lb 8oz… I stayed out one night with them and managed a new PB and at long last managed a 20+kg from my home stretch.

My new PB 44lb 4oz and a cracking looking fish

next to visit were some faces from the past…. John with son Jack and Ron with son in law Luke….. they had some tough fishing….. but by sticking at it they managed  some nice fish…. Jack with a 97lb cat Luke with a nice carp at 28lb, but John waited till the last minutes to have a crazy battle with a 87lb cat on the carp rods and then a stunning 33lb carp from the garden.

After a trip back for my lovely Granddaughter Gracie’s 2nd Birthday I was pleased to have back Martin, Dave,  Jock, Bill and Lee, they also fell foul of the river conditions last year so I particularly wanted them to have a good week. Arriving on a Tuesday and the weather forecast looking like heavy rain for Thursday evening I got them settled in at the Factory. Lee a very keen carp angler really got stuck in… with his “wingman” Dave staying out every night they caught some cracking carp and plenty of them to!!!! Cats obviously spawning they concentrated on the carp, introducing 5kg of Boilies each day  (www.custombaitservices.com) The rain came as predicted but boy did it bring the carp on….. Lee landing many 30lb + carp and when he had had enough Jock Bill and Martin all got in on the act, all landing 30lb+ carp, Dave too but he was looking after the 2 cat rods and had a few to 50lb…. fabulous weeks company and fishing. 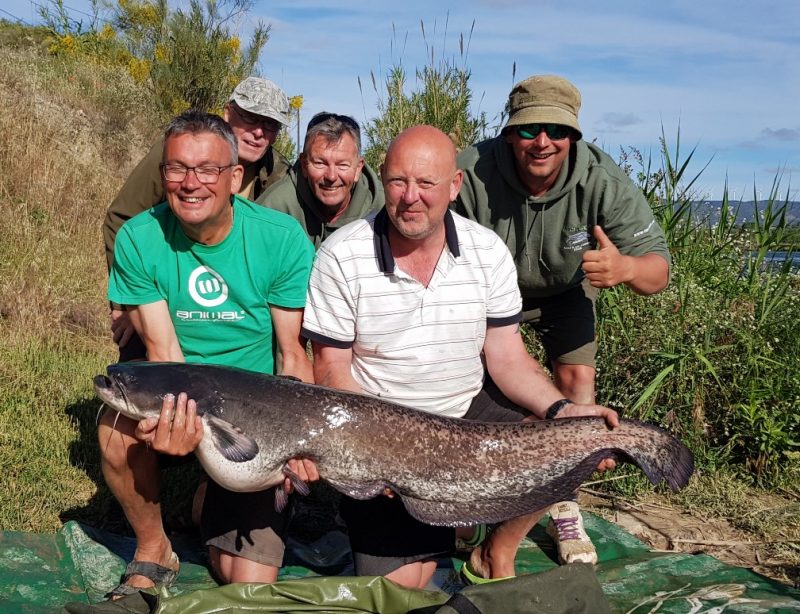