Well with there being no sign of the Virus situation getting any better, in fact worse! it didn’t look like I would have anymore customers this year. But Ben was travelling through Spain and wanted to stop off and have a few days fishing, great get the rods out.

Ben wanted to battle with the cats so that’s what we concentrated on.  October can produce a big fish so we went with the Daiwa Excellers, love these rods matched with the Penn 8500ll nice setup. We got the rods out for a few hours on the day of Bens’s arrival, cut short by some rain but importantly we got some pellets in ready for tomorrow. Morning came and we were soon fishing in the lovely warm sunshine and it didn’t take long and Ben was into his first Ebro cat. Good fight as always and soon Ben was holding up a cracker at 92lbs

Nice fish to get off the mark with and Ben followed it up with a couple more at 58 and 55lbs. We returned the following morning and started well but the fish were small, 40 the biggest. We had discussed about fishing the night and what with the nice weather that’s what we did. Just on dark and Ben was into a good fish which resulted in the biggest yet at 96lb. A couple of smaller fish came before a strange bite. Not much of a run and the fight was slow but heavy. It came in quickly and took me by surprise when a huge head came up and Ben had managed to land that target fish of over a Ton! 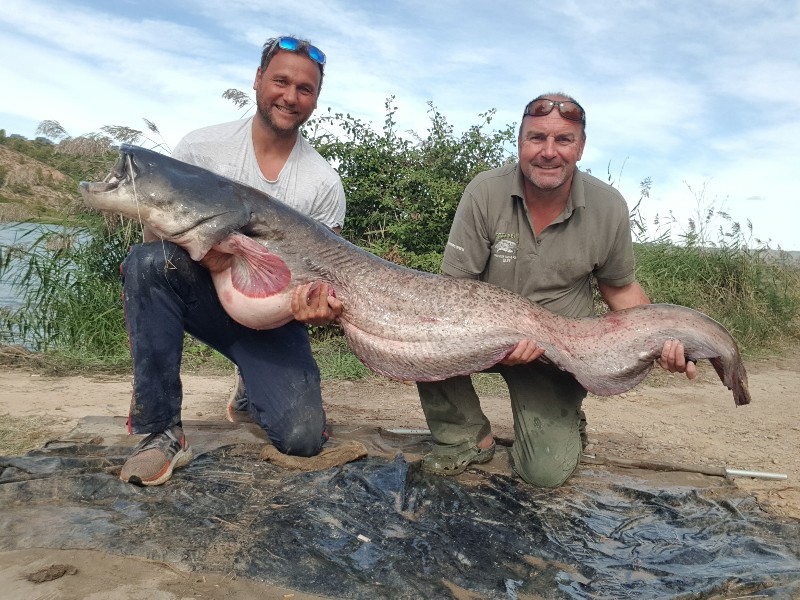 Huge head on this one

Morning came and it was time for Ben to continue on his journey, but not before he landed another nice fish at 80lb