Well the Season going well and plenty of good fish landed, Ian travelling by car from the Uk down to Southern Spain was stopping off for a few days fishing and some peace and quiet.

Thats exactly what he did…… the big cats were still off the feed due to spawning but the smaller ones obliged as did some nice carp too. 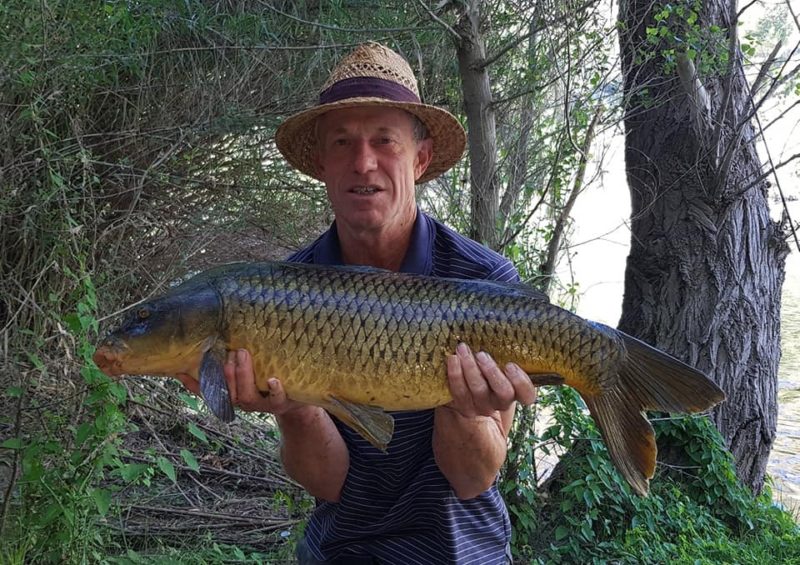 We fished days only, fishing with light tackle so although the fish were not the real biggies we made sure we had plenty of fun.

Next in were Les and Nick….. bit of a character is Les…… London Cab driver!!!! Yes you can imagine the stories……. anyway having visited most of the other guiding services locally Les seemed to like what was on offer here. Thought I’d get them in the Fig Tree swim and doing a couple of nights….. They had never been night fishing before but I got them all set up……. and they done very well because they had landed 7 fish in the first 24 hours.  A few more fish came  the next day as did a couple more into dark, but 2 nights was too much for them so they reeled in at midnight and got some sleep. 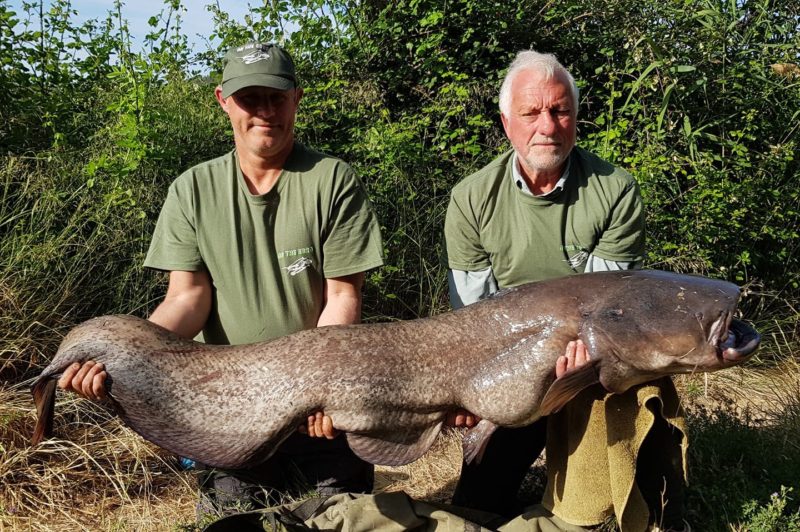 We fished days only for the remainder of their week here…… which  ended with 18 cats most of them 50 -70lb…. They tried their luck on the final day for the carp but ended up with a couple more cats…. good fun on the carp rods.

Now Phil is a good friend from school days….. he was accompanied with Rob Olsen….. author of “Waterlust” and “Tom’s Book”. Both dam good anglers  “Old School”. Having been here in my early days when we fished from the boat our goal was to tackle the Ebro’s Roach.

Early fears were soon realised as it was a bit early in year for them. So we concentrated on the carp. “ Touch ledgering” down stream in amongst the streamer weed…… it was exciting stuff and in a swim that hasn’t been fished in for ages. Rob landed a cracking common at 24lb but after 3 morning visits we decided to explore above the dams by boat.

We fished for carp in some cracking inlets off the main river ….. also Bass and Perch on a fly rod!!  fantastic fishing. Rob allowed me a Phil 1 morning to have a bit of fun with the cats….. Phil had brought over with him a very nice “split cane” rod .. matched with a beautiful centre pin reel spooled with 35lb nylon. To give us a bit more chance of  a bite I set up 2 Spod rods to accompany Phil’s setup.

The Spitfire flanked by 2 Euro Fighters…..

We got all 3 rods out on pellets….. and were just hoping that it was the Spitfire that ripped off. We had fish rolling over the baited area but took over 2 hours before we had any interest. Unfortunately it wasn’t the rod we really wanted but Phil still enjoyed his first scrap with a decent sized Catfish on a spod rod.

We had a few more goes at the carp from the boat… but settled for what we had caught and look forward to October next year when the Roach will most certainly be about.

Next to arrive was Grandad Bob, cool Callum and the very funny Archie.. They’d fished the Ebro a couple of times previously with good results so what would this trip bring them….. Well it was Archie who started the ball rolling….. he landed a cracking cat at 108lb on their first day.

….. poor Bob was being targeted by some hilarious banter but he had the last laugh when he landed the biggest of the trip at 110lb.

Their 4 days fishing saw them land 20 fish between them … good angling as the intense heat was starting to effect the fishing.  Many of their fish were 60lb plus with Callum’s biggest at 78lb….

You just can’t beat repeat customers, it’s truly very rewarding and I’m so great full to all of you who have become regulars……. except these two!!!!  Ha Ha…… Curtis and Tom….. what can you say about these two….. well quite a lot… this trip they’re pre-trip messages were that they intended on “smashing” it…. let’s see!,

We couldn’t get into the Fig Tree at first…. really needed the shade the trees give ( day time temps in the 40’s) but set up at the very end, nobody can bother you here and there a lot more room to spread out. Camp set including a tarpaulin sun shade.

Tom got the trip off to a flyer landing a 102lb cat within a couple of hours.

A few more fish came, but also saw some good fish lost, added to this the heat was getting unbearable and that the Fig Tree was now available the lads moved. So much more comfortable here and with no snags let the trip commence.  Well the boys didn’t hold back, bait was going in and they were starting to get rewarded for their efforts. Tom with a 115lb cat Curtis also with a “Ton” and plenty more 50’s 60’s 70’s and 80’s.

Unfortunately the intense heat caused  a huge forest  fire to start not too far away….. although not near enough to cause us problems there was a continuous fleet of fire brigade planes landing in front of us, sucking up water to drop onto the fires.

The lads finished with 48 fish landed, including 6 x Tons and a combined weight of over 2000lb of fish

Fabulous effort in conditions that topped 44 degrees ….. I’m sure they’ll be back again next year.

As mentioned before how nice it is to see people return, which brings me onto Chris. This trip he wanted big Roach, carp, cats and relax…. not sure if we could tick all the boxes but we’d give it a go.

Roach was our first target, from the boat, but became apparent that they still weren’t here in numbers, we caught a few but decided to concentrate on carp and cats.

Chris had fun with the cats landing some crackers including  this cracker new PB and breaking the magical Ton …..

Chris went on to catch some nice carp into the 20’s and we even had time for relaxing and good food from the village. A very good week had and poss another later visit for the Roach.

Next in were Ian and John, past  visitors again and revenge in order as the river wasn’t that kind to them on their previous trip.  This year we headed straight for the Fig Tree, 4 cat rods set up I went back to collect a bit more kit and some food. On my return Ian had done battle with an incredible creature……… first fish of the trip and within an hour of setting up Ian had landed a true Ebro monster and revenge was very sweet. The lads hadn’t managed to get it up the bank so it was carefully tied up…. its full scale was revealed and pulled the scales round to 160lb which wasn’t easy to read what with Ian wobbling all over the place helping lift it up!!!!!!!

No need to introduce Chris and Jonny, every year without fail since 2007 they have been here, and caught some amazing fish. Two years ago we incorporated a beach day including Tuna fishing jet skiing and beach and food, so that was on the agenda this week too. First we had to catch some fish and Chris duly got us off the mark with a 100lb cat. More fish were to be had but nothing beating Chris’s . 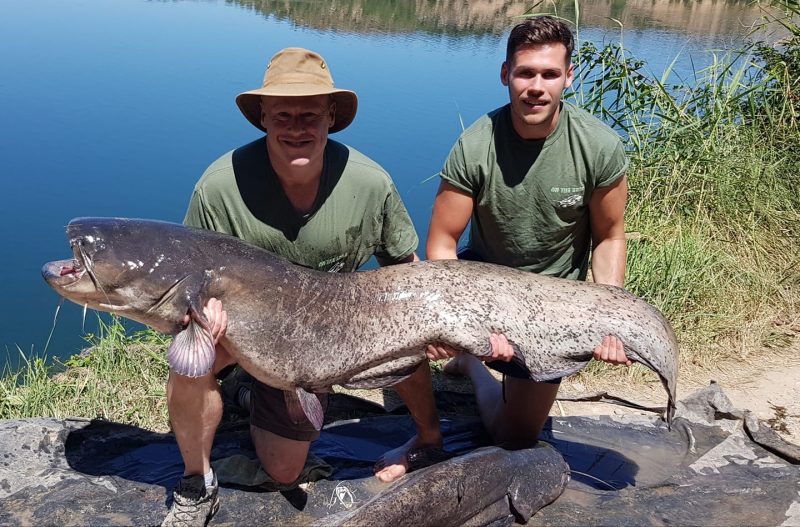 Beach arrived and we were straight out after some tuna, unfortunately currents weren’t favourable but we did catch plenty of mackerel which were great sport on light tackle. Rest on the beach followed by the jet skis followed by an amazing steak finished off a fantastic day.

The boys went on to catch more but again nothing beating Chris’s first…. see you next year.

Don arrived next with his best buddy Nige, great to see Don again and definitely shouldn’t  be dismissed when it comes to picking the actor for the next Bond films!!!!!!! Their goals were too to catch some fish whilst relaxing from their schedules at work. This trip certainly lived up to their expectations, they fished so well and reaped the rewards. Don caught 2 Tons at 108 and 114lb  whilst Nige caught loads including his biggest at 88lb……. plenty more caught and they had time to enjoy some rest and the odd glass of wine .

That trip brought me up-to my usual break for August, time to spend some time with family and  my lovely Granddaughter. What a fantastic first half to the year, well done to you all let’s hope we keep the momentum up till the end.